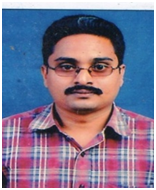 He is Working as a research scholar ,Bharathiar University,Coimbatore under the guidance of Dr. S.K.M.Basha,Associate Professor,NBKR Science & Arts College,Vidya Nagar