The Sydney Opera House, A milestone architecture in world

roof two main performance halls and a restaurant. These shell-structures are set upon a vast platform and are surrounded by terrace areas that function as pedestrian concourses. In 1957, when the project of the Sydney Opera House was awarded by an international jury to Danish architect Jørn Utzon, it marked a radically new approach to construction. The Sydney Opera House constitutes a masterpiece of 20th century architecture. Its significance is based on its unparalleled design and construction; its exceptional engineering achievements and technological innovation and its position as a world-famous icon of architecture. It is a daring and visionary experiment that has had an enduring influence on the emergent architecture of the late 20th century. Utzon's original design concept and his unique approach to building gave impetus to a collective creativity of architects, engineers and builders. Ove Arup's engineering achievements helped make Utzon's vision a reality. The design represents an extraordinary interpretation and response to the setting in Sydney Harbour. The Sydney Opera House is also of outstanding universal value for its achievements in structural engineering and building technology. The building is a great artistic monument and an icon, accessible to society at large.  Criterion (i): The Sydney Opera House is a great architectural work of the 20th century. It represents multiple strands of creativity, both in architectural form and structural design, a great urban sculpture carefully set in a remarkable waterscape and a world famous iconic building. All elements necessary to express the values of the Sydney Opera House are included within the boundaries of the nominated area and buffer zone. This ensures the complete representation of its significance as an architectural object of great beauty in its waterscape setting. The Sydney Opera House continues to perform its function as a world-class performing arts centre. The Conservation Plan specifies the need to balance the roles of the building as an architectural monument and as a state of the art performing centre, thus retaining its authenticity of use and function. Attention given to retaining the building's authenticity culminated with the Conservation Plan and the Utzon Design Principles. The Sydney Opera House was included in the National Heritage List in 2005 under the Environment Protection and Biodiversity Conservation Act 1999 and on the State Heritage Register of New South Wales in 2003 under the Heritage Act 1977. Listing in the National Heritage List implies that any proposed action to be taken inside or outside the boundaries of a National Heritage place or a World Heritage property that may have a significant impact on the heritage values is prohibited without the approval of the Minister for the Environment and Heritage. A buffer zone has been established. The present state of conservation is very good. The property is maintained and preserved through regular and rigorous repair and conservation programmes. The management system of the Sydney Opera House takes into account a wide range of measures provided under planning and heritage legislation and policies of both the Australian Government and the New South Wales Government.

Email ThisBlogThis!Share to TwitterShare to FacebookShare to Pinterest
Location: Australia 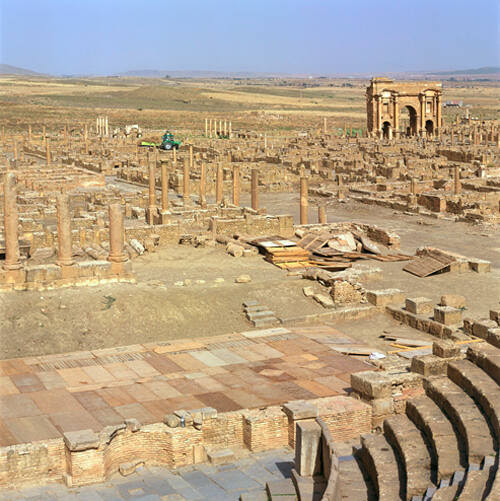 
Inhabited since prehistoric times, Butrint has been the site of a Greek colony, a Roman city and a bishopric. Following a period of prosperity under Byzantine administration, then a brief occupation by the Venetians, the city was abandoned in the late Middle Ages after marshes formed in the area. The present archaeological site is a repository of ruins representing each period in the city’s development.

The city of Butrint is one of the fragments which form the fabric of Albania's ancient cultural landscape. Nestling in the highlands in the far south of the country and surrounded by dense vegetation, Butrint was linked to the Mediterranean by the Vivari canal, which runs from the Butrint Lake to the Ionian Sea. The settlement became an important stop along the merchant trade routes and reached the height of its glory in the 4th century BC as one of the major maritime and commercial centres of the ancient world. The sight of the fortifications alone, which date from the 6th century BC, evokes the military and economic potential of the city at the time. The hill on which the acropolis stands is encircled by a wall built from huge stone blocks. The amphitheatre, dating from the 3rd century BC, bears witness to the cultural riches of the city: the stone banks of seating, of which 23 rows have been preserved, would have held an audience of 1,500. The theatre is situated at the foot of the acropolis, close by two temples, one of which is dedicated to Asclepios, the Greek god of medicine, who was worshipped by the city's inhabitants. Excavations have brought the light to many objects - plates, vases, ceramic candlesticks - as well as sculptures including a remarkable 'Goddess of Butrint' which seems to completely embody, in the perfection of its features, the Greek ideal of physical beauty. Under the rule of the Romans the city was to fall slowly into decay. In spite of this, three monumental fountains, three public baths, a gymnasium decorated with mosaics, and especially the aqueduct constructed during the reign of Augustus, prove that the site was not completely abandoned. In the palaeo-Christian period, two basilicas and a baptistry were built; its later medieval history was turbulent as the town was involved, first, in the power struggles between Byzantium and successive Norman, Angevin and Venetian states and then in the conflict between Venice and the Ottoman Turks. Subterranean infiltration of water forced the inhabitants to flee, and the abandoned city was covered by mud and vegetation. It was not until the beginning of the 20th century that systematic excavations were carried out by Italian archaeologists; following the liberation of Albania in 1944, Albanian archaeologists undertook more ambitious excavations. The mud and vegetation that covered Butrint had protected it from the natural and human ravages of time, and the entire city was revealed almost intact. Key areas of excavation include a late antique palatial dwelling known as the Triconch Palace, the spectacular late antiquity baptistry, and a Roman villa and associated late antiquity church at Diaporit. This archaeological site is a veritable conservatory of major monuments in ruins from each period of the city's development. Thus. the fortifications bear testimony to the different stages of their construction from the time of the Greek colony until the Middle Ages. The most interesting ancient Greek monument is the theatre. which is fairly well preserved. The major ruin from the paleo-Christian era is the baptistery. built inside the Roman public baths. The floor has a beautiful mosaic decoration. The paleo-Christian basilica was rebuilt in the 9th century and the ruins are sufficiently well preserved to permit analysis of the structure (three naves with a transept. and an exterior polygonal apse).