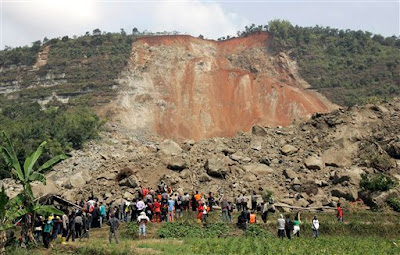 'It has been raining non-stop for two days, and that is the reason this huge chunk of mountain came down - a whole village has been wiped away,' a local reporter said. Heavy rains in recent days triggered a rush of mud, rocks and trees from the mountains overlooking Java's Banjarnegra District on Friday evening. The landslide buried at least 105 houses in and near Sampang village. Sutopo Purwo Nugroho, the spokesman for Indonesia’s National Disaster Mitigation Agency, said on Saturday that more than 100 houses had been buried in the large landslide that took place in a hilly district in the province of Central Java. In recent years, floods and landslides have repeatedly battered Indonesia, which is a chain of 17,000 islands where millions of people live in mountainous areas or near fertile flood plains. During Indonesia’s annual rainy season, which peaks between December and February, the country is prone to flooding, exacerbated by clogged rivers and sewers. Satellite data appears to show parts of central Java have received about 200 millimeters (7.9 inches) of rain so far this month. That would be roughly the amount that the area gets on average the entire month of December. The Journal of Geography and Geology confirmed the incident and stressed upon improved disaster management at right time.